Do you really need antivirus software? Gizmodo says you don’t need an antivirus app anymore. On the other hand, Tom’s Guide says you most definitely do. Two of the biggest technology websites at odds with each other? How can this be?

Technology is evolving at such a rapid pace that operating systems are now prioritizing the need for people to safely and effectively secure their data. This was highlighted in Gizmodo’s article by saying that operating systems such as Windows and macOS are constantly releasing updates to better protect your system and other internet-facing software. But what does this mean exactly?

Put simply, by keeping your operating system and other software updated, you are lessening the risk of security breaches as hackers are known to exploit outdated systems. However, keeping your software updated - in this day and age - isn’t enough to protect you from the dangers of the internet. Why? It’s because as technology evolves, cyberattacks evolve along with it.

This is where an antivirus software comes in.

An antivirus software is designed to detect and safely remove malicious software from your computer. These programs scan files, programs, and other data stored on your computer to search for a wide variety of threats that might harm your device.

The great thing about antivirus software, free or paid, is that it provides real-time threat detection and protection against the most common computer vulnerabilities.

What are these vulnerabilities?

A computer vulnerability is a weakness in your system or network that attackers can take advantage of to damage or take control of your device. Basic things like putting off system updates, ignoring outdated software, and other unresolved issues in your system may leave you vulnerable to a variety of attacks.

Let’s take a look at some of the most common computer vulnerabilities.

When you use weak passwords, you are making it easier for attackers to gain access to your stuff. Passwords play a vital role in ensuring that your accounts are safe and secure. Make sure that your passwords have eight characters or more and use a combination of letters and special characters. Another thing to consider is the use of 2FA (Two-Factor Authentication) which adds another layer of security by confirming whether or not you are the one trying to access your accounts.

Limiting or controlling access to your network refers to the practice of determining who can access your network and who can’t. According to Emil Isanov, CEO of ETech 7, “The main goal of controlled access is to minimize the risk of hackers getting into your system. This can mean restricting the access to sensitive data across an organization or a company’s network as well as restricting access to the various types of applications used by a company.”

An outdated system or software leaves you vulnerable to ransomware attacks. Updates are important because they often include critical patches to the security holes found in past versions. According to McAfee, in addition to security fixes, software updates can also include new or enhanced features or better compatibility with different devices or applications. They can also improve the stability of your software, and remove outdated features.

“Think of this as an investment - spending a couple of hours for a presentation about basic security principles would help your employees determine which sites to avoid, spot sketchy emails, and perform basic troubleshooting methods. This basic preventative measure would not only save you grief in fixing a computer that was infected because an employee ‘just didn’t know’ but also avoid probable downtime for your company,” says Emil Isanov, CEO, ETech 7.

What does this have to do with antivirus software? We’re getting there! An antivirus isn’t the end all be all strategy for all of your IT security needs. It should be part of a holistic approach to bolster your cybersecurity measures. By ensuring that you are using strong passwords, limiting access to your network, updating your system and software, and educating your employees, you are already strengthening your system’s protection against cyberattacks. However, there are more to antiviruses than you might think. Here are some of the advantages of having an antivirus software:

A good antivirus program will protect you while you surf the web, preventing hackers from gaining access to sensitive information like bank accounts and credit card information. Most antivirus software include firewall protection configured to block any unauthorized connections to your system/network/computer.

Antivirus programs include basic internet protection in their premium subscriptions. Nowadays, most viruses are delivered through different types of ad and spam attacks. As mentioned above, spending a couple of hours for a presentation about basic security principles would help your employees determine which sites to avoid, which links to not click, and which emails are sketchy.

All antivirus software are tasked to protect your system from viruses, spyware, malware, and even phishing attacks. Most antivirus software have free and premium offerings. There are a lot of arguments when it comes to free vs paid but the main thing to nail down is what YOU, as a business, really need.

For us at ETech 7 - we firmly believe that antiviruses provide another layer of protection for your systems. Depending on whether or not you avail of free or premium packages, antiviruses will likely catch and resolve any type of attack before it can do any real damage. But what exactly is the difference between free and paid antivirus software?

What’s the difference between free vs paid antivirus software?

Is there a considerable difference between free antivirus software and paid antivirus software? As with most free things, unpaid versions would almost always have limitations. Most limitations, for the casual computer user, are pretty harmless. It just depends on what you need and what sort of information you are dealing with on a daily basis.

The Best Antivirus Software for 2021 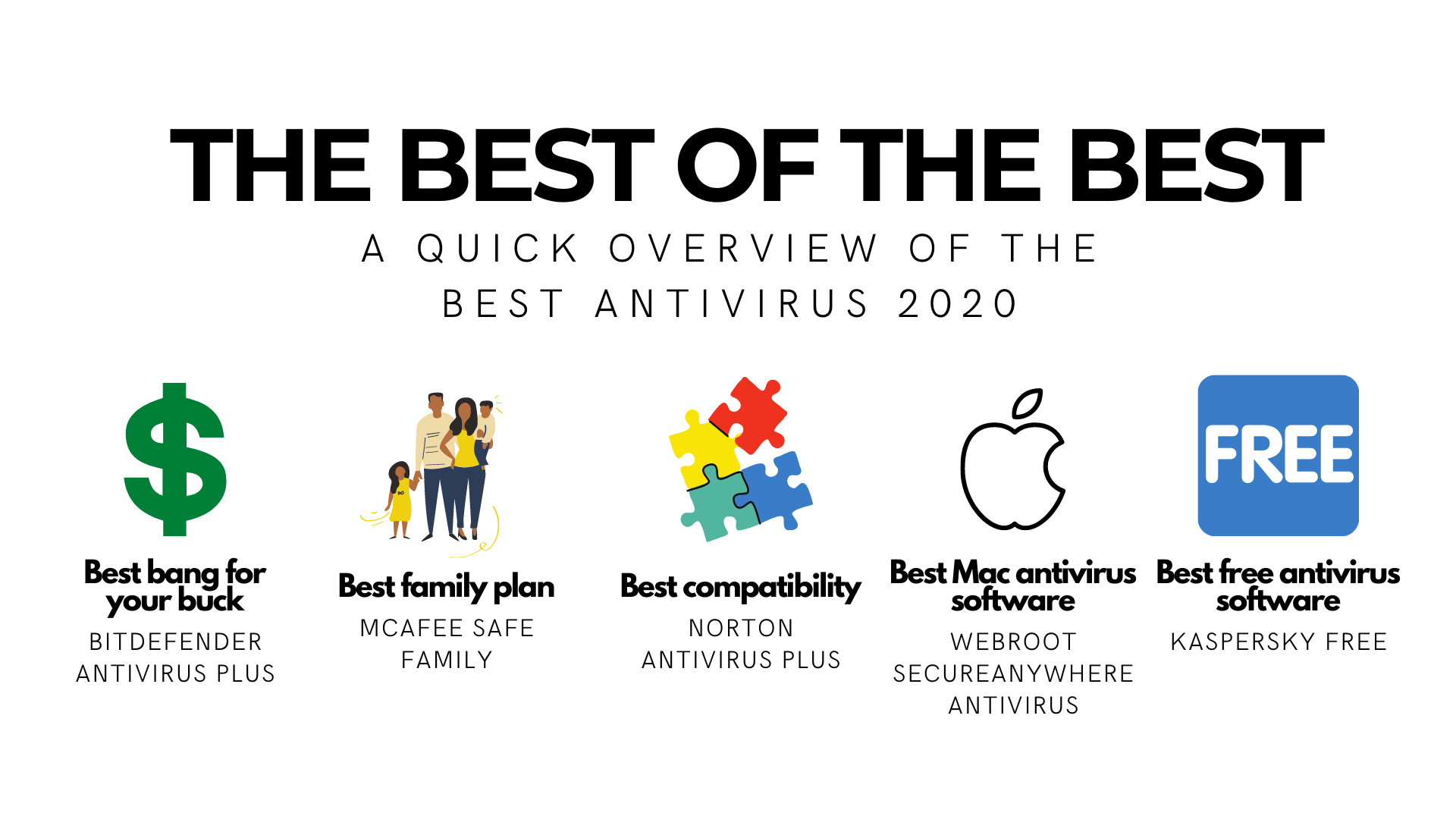 Best bang for your buck:

When it comes to pricing, Bitdefender Antivirus Plus comes at $39.99 a month.

Is Bitdefender Antivirus Plus Good? Let’s take a look at its notable features:

What sets McAfee apart from its competitors is its McAfee Safe Family feature which lets parents monitor their children’s device activity from websites to applications. Parents can even set rules and time limits for different apps and websites based on their kid’s needs. This robust parental control software helps parents create a sensible digital schedule for their children by restricting device usage to certain hours of the day.

Is McAfee Safe Family Good? Let’s take a look at its notable features:

If you’re looking for an antivirus software that offers unparalleled compatibility, then look no further. Norton Antivirus Plus protects a wide range of systems such as Windows, Mac, iPhone, and Android devices. According to Norton’s official website, one thing that sets Norton Antivirus Plus apart from other antiviruses in the market is its smart firewall feature. The smart firewall feature allows you to monitor communications between your computer and other computers and blocks unauthorized traffic. This helps protect your personal stuff and safeguards other sensitive data. However, one big downside is that while Norton Antivirus Plus offers compatibility with other devices, you would have to pay $19.99/year for each additional device.

You can avail of Norton Antivirus Plus for $19.99/year for the first year.

Is Norton Antivirus Plus Good? Let’s take a look at its notable features:

Webroot SecureAnywhere Antivirus works amazingly well with macOS devices. With fast scans and a strong phishing protection feature, you can be sure that your device’s protection is second to none. This antivirus software boasts multiple features that would fit the needs of anyone looking for real-time identity protection, anti-malware, and anti-phishing. One great thing about Webroot is how “lightweight” it is without compromising important security features - installation takes about a minute max and features layers upon layers of ransomware, malware, and phishing measures. Webroot SecureAnywhere Antivirus is, undoubtedly, the best antivirus for Macs.

Is Webroot SecureAnywhere Antivirus Good? Let’s take a look at its notable features:

Is Kaspersky Antivirus Free Good? Let’s take a look at its notable features:

Key Takeaway: So what is the best antivirus software?

Is there really a single best antivirus software out there? Maybe not.

Is there an antivirus out there that’s perfect for you? Heck yes!

Each entry in this list has been carefully chosen for its security measures. The best free and paid antivirus software should be able to offer you strong antivirus protection measures to give you the peace of mind that you need. If you’re worried about your device’s protection, talk to an expert about the measures you can take to further protect yourself and your information. In today’s world, you just can never be too careful!

Determining what you need from an antivirus software is the first step to finding a program that suits you best. Don’t be overwhelmed by the plethora of choices out in the market! Factors such as ease of use, relevant features, and purpose are just some of the key things to consider when choosing an antivirus software. All it takes is a little bit of research and, most importantly, patience.