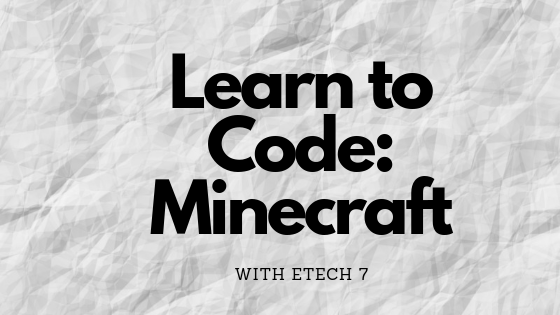 Have you ever thought about learning to code?

According to Forbes.com, programming is increasing 12% faster than the rest of the job market. In 2015, seven million job openings required coding skills. There's a huge demand for skilled workers in the IT industry, and no one to fill it. So the incentive to learn coding is there, and there's no shortage of teaching outlets. If the materials are everywhere, why doesn’t everyone know how to code? People often start with vague, general objectives like “I want to learn coding”.  But once they actually start to code, it can get tedious, complicated, and frustrating. Without a specific goal in mind, it’s easy to lose motivation and give up.

This is where video games come in.

Yes, it might sound outlandish and even unrelated. But video games like Minecraft are making huge changes to how kids and adults view coding. Keep reading for Etech 7's take on how Minecraft is encouraging more and more people to learn, and stick with, coding!

Let’s first start by introducing the video game itself. Minecraft is a popular game where users can build their own worlds and everything in them. There are no rules, no missions, and no defined incentives. The only real point of the game is to build whatever you want; the only real limit is your imagination. The extreme freedom the game offers is what made it the second best-selling game in history, and for good reason.

Minecraft is one of the very few games where players can make fundamental changes to the game itself. Players can change how the game looks, feels and acts. These modifications, called “mods”, create thousands of different ways to experience the game. Because Minecraft is a fairly realistic game (e.g. you need food and shelter to survive), there’s a lot of room for creativity. Some "mods" let you fly, others make drastic changes to your environment and the creatures (*cough* dinosaurs) roaming your map.

To make these “mods”, many people use software that other players have already created because it’s faster and easier. However, to make detailed changes in the nature of the world, you need to create your own code (it’s also great practice). Minecraft revolves around being modifiable, and to create the world you want, you have to delve into the realm of coding. There are several step-by-step guides online that teach how to “mod” anything from ores to food, from scratch. Here are a few that we thought were particularly helpful!

A Grownups Guide to Minecraft and Writing Minecraft Mods

And if you feel lost at any point, watching a simple Java introduction Youtube video can help you make more sense of these instructions.

How can kids use Minecraft to learn code?

In 2016, Microsoft recognized Minecraft’s potential for education and released “Minecraft: Education Edition”. It's a version of Minecraft that’s designed for the classroom and is already in use at over 100 countries around the world.

One of the newer additions to Minecraft EE is its coding feature: Code Builder. This feature lets players change the Minecraft world without having to use or create mods. It works through a little robot that responds to different commands you give it. These commands are in the form of colorful blocks of text that the player drags and drops into the main window. The little robot then takes these commands and carries them out.

Each command represents a line of code and some actions need several of them. For the action to play out properly, each command has to be correct and in order. This meticulous, step-by-step process loosely mimics "real coding". It gives insight into the amount of work it takes to execute even the simplest of actions through code. This format also portrays coding as fun and colorful, not text-intensive and monotone. 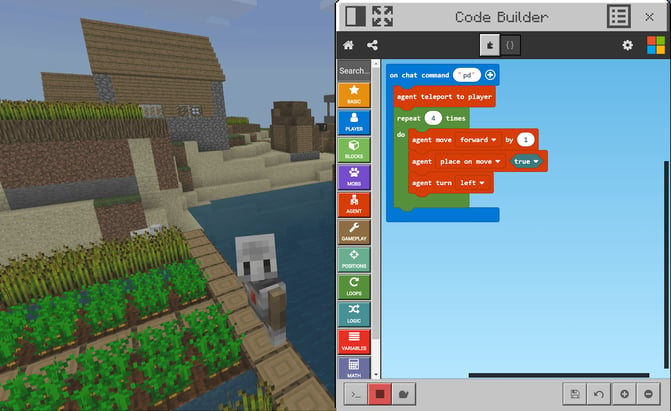 How can adults use Minecraft to learn code?

For a more general introduction, Microsoft’s Hour of Code is a great alternative.  Hour of Code is Microsoft’s basic introduction to coding, using Minecraft as its medium. In this free experience, players can choose one of several paths. They can choose to create an underwater world, or lead a character through an adventure. The player uses blocks of code (commands) to build, lead or explore. This process gives meaning and motivation to their coding. It's also a bit more structured and less of a commitment (hour of code really means one hour of code).

Most people (if not all people) like to see results from their hard work. Coding is all the hard work, but often gives very few results. Usually, students write pages of code until they can test their work and even after testing, if even one line is wrong, they won't see results. In Minecraft, the code inputted unfolds right before your eyes. This immediate reward system connects students of all ages because--who doesn't like results? Hour of Code combines the structure and guidance of an online class with Minecraft’s endless creative possibilities. You get the immediate results from Minecraft EE but with proper instruction on what you’re doing and why. 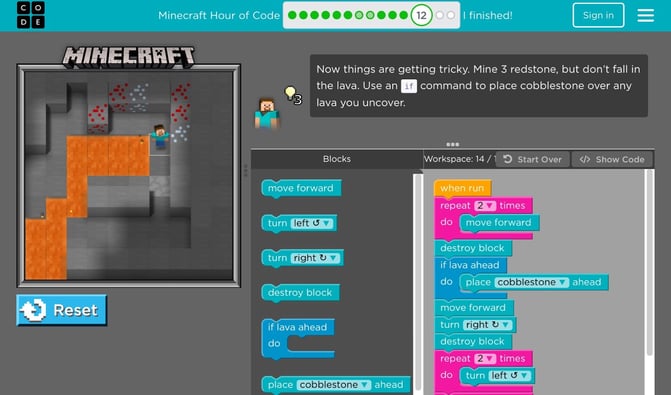 In Minecraft EE, and with different “mods”, your actions have a clear purpose. You placed that block of stone down to build a castle or you built a pickaxe to mine. Applying that line of thinking to coding means you’re not learning for the sake of another resume skill. Instead, you have a clear, manageable goal in mind. Every second, minute and hour that goes into learning to code, is one more step taken to fulfill that goal.

Learning one of the most valuable skills for job hunters through a video game may seem too good to be true. Readers need to keep this in mind: the coding you learn from Minecraft is only an introduction. It’s a fun game and a great place to start. But if you’re interested in a programming  career, Minecraft cannot be your one stop shop. It's best used if you want to learn the basics of coding, or are in a rut in your learning process. You can gain motivation and rediscover what made you love coding in the first place!